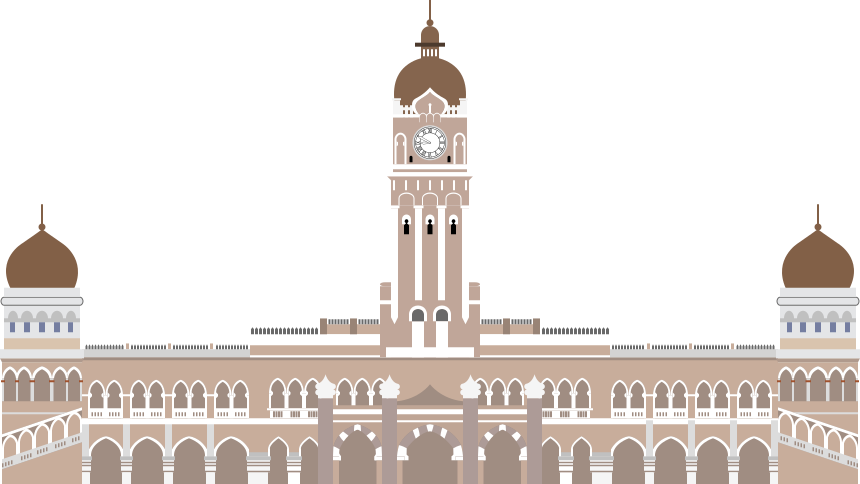 The Sultan Abdul Samad Building is a landmark in Kuala Lumpur, Malaysia. Completed in 1897, it currently houses the Malaysian Ministry of Communications and Multimedia (KKMM). The building was named after Sultan Abdul Samad, the reigning Sultan of Selangor (in office 1857-98) when this building was completed. It featured a 40m-tall clock tower, which chimed every half an hour. During British Colonial rule, this building housed the Federal Secretariat of the Federated Malay States, consisting of Perak, Selangor, Pahang and Negeri Sembilan. On the stroke of midnight of 31 August 1957, Tunku Abdul Rahman, Malaya's first prime minister, declared Malaya independent from the UK at the Dataran Merdeka which was located right in front of this building. Since then, annual Malaysian National Day parades are at Dataran Merdeka on 31 August each year. Between 1957 and 1974 this building housed the headquarters of the Selangor State Government. Kuala Lumpur was the capital of Selangor state until 1974, when Kuala Lumpur was placed under direct administration of the Malaysian federal government. The Selangor state government subsequently moved to Klang and finally Shah Alam in 1978, where it remains until today. The building subsequently underwent refurbishment in the early 1980s and housed the Federal Court of Malaysia until 2007. The building was given a slight facelift in 2012 with its copper domes polished and LED lights installed.

This is a completely free image Sultan Abdul Samad Building, Kuala Lumpur that you can download, post, and use for any purpose.

Image License: CC0 No Rights Reserved
You can copy, modify, distribute and perform the work, even for commercial purposes, all without asking permission, and at no cost. This image is completely free.

SVG files are the highest quality, and can be used in recent versions of Microsoft Word, PowerPoint, and other office tools.

PNG files are the most compatible. Use this on your web page, in your presentation, or in a printed document.

Map of the Federated Malay States, 1940